July 2017 marked the 200th anniversary of the death of English writer Jane Austen (1775-1817), famous for her novels Pride and Prejudice, Sense and Sensibility, Emma, and Persuasion. In them she focused on the daily lives of country residents in Georgian England, highlighting the social mores of the time and the immense pressure on young women to marry well, since there were few other economic options available to them. Austen is featured on a newly released ten-pound note, only the third woman to be honored on British currency. In celebration of her life, British Heritage Travel sponsored a week-long tour of the places that inspired Jane Austen.

We were based in Salisbury at the Red Lion Hotel, a beautiful location dating back to 1200. Salisbury is also known for its beautiful cathedral…

…which houses one of the four existing copies of the Magna Carta, a document written in 1215 spelling out the rights of the noblemen under King John.

At Steventon we visited the Church of St. Nicholas…

…where Austen worshiped and where her father preached. We traveled to Chawton to the cottage where she did much of her writing. Next was a walking tour of Bath, including the Jane Austen Centre and the Assembly Rooms where she attended balls and evening parties.

Lacock Village dates from the 13th century, and was the village of Meryton in BBC’s Pride and Prejudice, where Lydia and Kitty Bennet shopped while they searched for the handsome Mr. Wickham.

Several scenes from the 1995 movie Sense and Sensibility were filmed at Montacute House, built in 1601, including the one where Marianne was rejected by Willoughby.

The landscaped gardens of Stourhead were filmed in the 2005 version of Pride and Prejudice, including the Temple of Apollo where Darcy first proposed to Elizabeth Bennet. The lake here is reminiscent of the one where Darcy took his cooling swim before returning to his house to find Lizzy visiting, along with her aunt and uncle.

Austen spent her last days in Winchester. We saw the bookstore where she shopped and the house where she died. 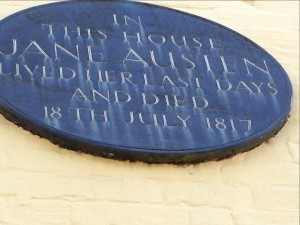 She is buried in Winchester Cathedral. 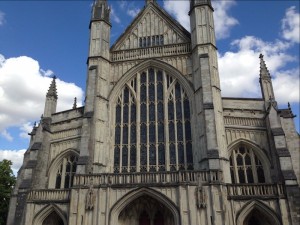 She never married, was always dependent on her family for financial support, and died at the early age of 41. In her novels, the young heroine always falls in love and marries a handsome, rich bachelor, living the life Austen never had but perhaps always dreamed of.

What are some of your favorite travel spots? I look forward to hearing about them on Facebook.