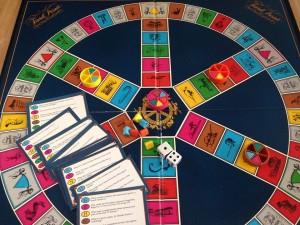 Last month I went on a three-week cruise to Brazil and the Amazon. One of the popular onboard activities was Trivial Pursuit.

Our ten-person team was comprised of one couple from England, one from Scotland and the six of us who were traveling together. We six all lived in the same city and had similar educational backgrounds, tastes, and travel experiences.

Having a lot of things in common makes for a good travelling group. It does not spell success for Trivial Pursuit. At the end of three weeks, our team was dead last in the competition.

What about the teams that outperformed? They had much less in common. They were strangers on a boat, with a much more diverse mix of countries, ages, and backgrounds.

What does this tell us about investing?

Diversification is a major key to investment success. (Also known as, don’t put all your eggs in one basket.) You need stocks that go up a lot in a bull market. Stocks that maybe don’t go up as much but that pay attractive dividends. And stocks that just sit there without moving very much at all when we have a big pullback.

Does your portfolio have the right stuff? If you aren’t sure, check with your financial advisor.

Try your hand at some of the questions from our Trivial Pursuit game. The answers are at the end.