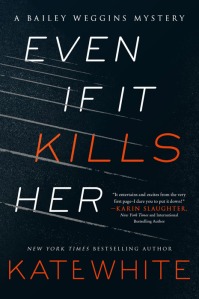 Kate White, former editor of Cosmopolitan magazine, gave an inspirational talk recently in Richmond, sharing such nuggets as “don’t believe everything you think,” “own your excellence,” “don’t lose fabulous opportunities,” “you don’t have to be 100% right,” and “ask for what you want.” Energetic and personable, White gave examples from her own work experience to illustrate her points.

Following her own advice, she transitioned from a magazine editor to a mystery writer. Even If It Kills Her is her 12th work of fiction and 6th in the Bailey Weggins mystery series.

Bailey is a former reporter turned crime writer, whose college friend Jillian asks her to investigate the 16-year-old murder of Jillian’s family. A man was convicted of the murders and later died in prison, but new DNA evidence shows he probably was not the killer. Jillian wants to find out who was responsible. The two women return to Jillian’s home town to dig into clues and identify the culprit.

The characters are interesting and the action fast-paced. There are several twists and turns in the plot, and I didn’t figure out who had committed the murders until late in the story. White does a good job of keeping the reader engaged throughout the book. I’m going to check out the rest of the series.

What mysteries have caught your attention? Tell me on Facebook.