Manaus, Brazil, called the “Paris of the Tropics,” was the richest city in South America in the late 1800s due to the rubber trade. To celebrate its affluence, the city constructed a magnificent opera house known as Teatro Amazonas, which contained marble, crystal, tiles, and paintings imported from all over Europe.

The rubber trade collapsed when the seeds of the rubber tree were later smuggled into Southeast Asia, which could produce rubber at a lower cost. Manaus fell into poverty and the theater was closed for most of the twentieth century. It reopened in 1997.

Located in the heart of the Amazon, Manaus is accessible mainly by boat or airplane. 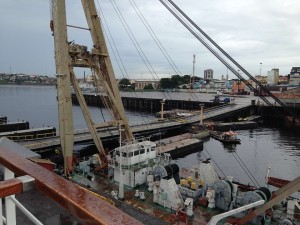 We visited the city market, where you can buy spices, fruits, vegetables, seafood, meats, and souvenirs.

In 1967 Manaus became a duty-free zone, which helped with its economic recovery. It is the 7th largest city in Brazil, with a population of over 2 million. The city has an international airport, which makes it a top tourist destination for those wishing to visit the Amazon.

What are some of your favorite travel spots? I look forward to hearing about them on Facebook.